secret: I need feminism because I like telling people what I think about stuff

It's hard to believe, but there are a lot of places in the world where a woman does not have a voice. I grew up with my voice splattered all over the place, and yet even here in this privledged point in time that I call my own, having a voice gets tricky sometimes.

I'm trying to figure out exactly how to speak up about things I believe without alienating anyone, and am sort of realising that it's not possible to keep everyone happy and unoffended, and that perhaps you have to break a few eggs to make a cake.

It's been an interesting month of thinking, reading and learning for me. After I wrote "We need feminism because ... " a while ago, I gradually found a whole online community of feminists who hold wildly varying opinions on a wide variety of current issues. So really the feminist world is just like any other. I keep up with all of them on Facebook and so I have an idea what the Radical feminists are concerned with, what the feminists in Australia are thinkin', what's happening in the UK (Gay marriage is legalised! Go the Queen!), and much more besides.

The beautiful thing I'm seeing (amongst the folk I follow) is the inclusiveness. I listened to the wonderful Courtney Martin's TED Talk on Feminism and had a good think about intersectionality, which may just be a way forward, if we must take a step away from calling it feminism to get those caught up in the semantics of the F word involved (must we?). I've read, giggled at and nearly finished "How to be a Woman" by Caitlin Moran (book review to follow), enjoying the conversational tone of writing by a woman who just wants a point out some truths of life, without too much drama and even that much controversy, simply from the matter of fact narration. I highly recommend buying a copy: we can have coffee after you've read it and share our enjoyment!

I also have fallen head over heels for Tina Fey after reading Bossypants (even though Kate J had told me a long time ago that it was funny, and in fact had read me some funny parts to illustrate her point). I love her so much I'll probably write about her soon, once I have watched a whole lot more SNL and also seen every clip of her ever on youtube.

I feel like maybe it's a great point in time for having these conversations, but after an assortment of experiences in the last month I'd probably observe that you may end up in discussion with a person of the male persuasion who may not like what you are saying, not exactly. Or you may find, very rewardingly, that your father and brother actually talked about feminist issues over dinner and you weren't even there to bring it up (proud sister & daughter right here).

The world expands. For me, it's reading articles like this one of Phaedra Starling's, which says more eloqently that I can exactly what I was getting at in my piece. Don't be put off by the title: it's a nice little piece which explains how to approach a pretty girl who doesn't know you, in public. We women don't hate you for trying, we just don't know you yet, and you could be anybody.

Or it's going the other way, into the world of Tavi Gevinson's Rookie. Such a beautiful, exciting and creative idea, and she's making people take notice. I myself am out of my mind thrilled to be seeing her speak on the weekend at Sydney Opera House. Heroine, that's for darned sure.

I haven't been terribly focused on specifically feminist issues this last month; I've been focused on myself, and I am a feminist, so it sort of works. I have done a few things, like my women-only July of musical discovery, and I've been reading a lot of stuff. I'm going to start putting a few bits and pieces out in bite size chunks, much akin to leaving cookies out for Santa. I hope you guys just leave crumbs, and not spat out bits of cookie. 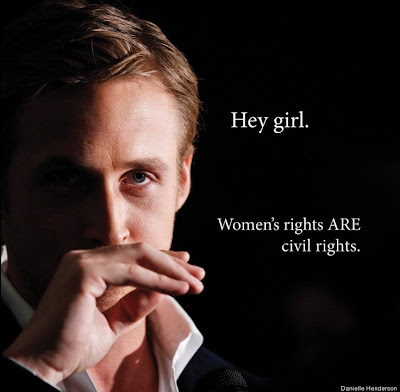