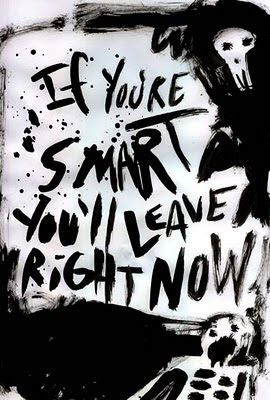 treasure: the joy to be found in the giving away of things

i took away a part of my heart by giving clothes away, good clothes that i loved, to friends. it's because, well, i have lots more. like.... a lot lot more.

my aim is to be really good at giving things away... for the next month.

i can do that, that shit is *easy*
written by helen 1 comment:

secret: a rainy sunday afternoon and much contemplation

oh god, what am i going to do with my life??

yes folks, it's one of those posts. i just turned 25. i got a tattoo that i love. in a month, i will be able to go snowboarding, which is so exciting! i just can't seem to see past it. which is probably not a bad thing. but for some reason, tonight i just want to make some kind of life-altering decision.

i am certain i'll be over it by the morning.

firstly, sort out where home is.

i have a life here. it's a life that i like. here is home.
melbourne is home. there are people in it that i love and miss.
brisbane might be fun.

pfffft I am going to bed.

Labels: angst, feelings, home, life, when i grow up

halloween is upcoming, and i was all set on going as a zombie, until this sweeeeet poofy skirt came in, then before i knew it BAM! angel wings and matching angel halo headband.

but then... a bottle of fake blood.

so now i'm all confused. but i think the girly sparkly angel option might be fun. last year i was a dinosaur. times of fun, times of absolute brilliance: hugh in his emo spiderman onesie, me in my amazing dinosaur onesie.

we were both feeling really half-assed about the whole halloween concept, on account of being ri-donk-ulously hungover from the night before. we both sat on the couch mumbling about it for a few hours, along the lines of "we got the costumes" "yeah but i feel like shit" "yeah me too" ... then silence, then one of us would get a text message about a pre-drinking occasion at a friend's place, which we would debate the various merits of before making a non-decision. this silence would be interrupted by another text... we were invited to pre-drink with 4 different groups of people but we neglected committing to anything.

then 8.30 rolled 'round, at which time hugh managed the motivation to grab the bottle of fireball (we had agreed at our house there was to be fireball available at all times. also, chocolate milk). we downed beers and shots while getting ready, giggling more and more as the fireball kicked in. we had one bus option before all public transport stopped for an hour (it does that in dead season for some stupid reason). when we got to the bus stop hugh realised he had forgotten his spiderman gloves... NOT THE GLOVES!

he raced back up the hill, up 3 flights of stairs and back in under 5 minutes. he was running down the hill as the bus came round the corner.

picture, if you will (as an imaginary bus passenger): a guy dressed in a pretty much skintight spiderman suit with mask, gloves etc, running at top speed down an icy hill, with a girl in a bright green dinosaur onesie, complete with dinosaur head, alternately laughing hysterically and yelling "go spiderman go!!!" at the top of her lungs.

needless to say we got a huge cheer when we got on the bus... i haven't yelled that loud in public since then. 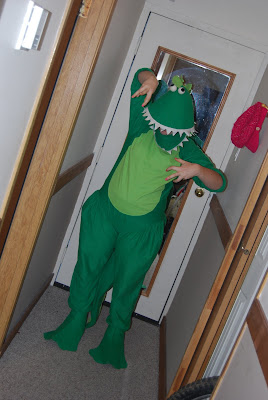 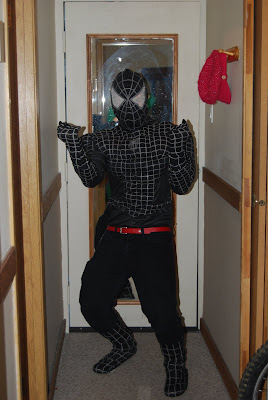 day 29. in this past month, what have you learned.

- that i love cereal
- how to use iBooks on my iPhone
- how to Skype on my iPhone
- that drinking less is a good way to feel less suicidal in the morning
- that i could actually be a good boss with a little practice
- that i am an ideal tenant (every place we looked at while househunting was offered to us... that's never happened to me before)
- that i can justify pretty much anything i do because i am unabashedly selfish
- that i love Broken Social Scene (band. amazing live. amazing)
- that life is like a box of chocolates 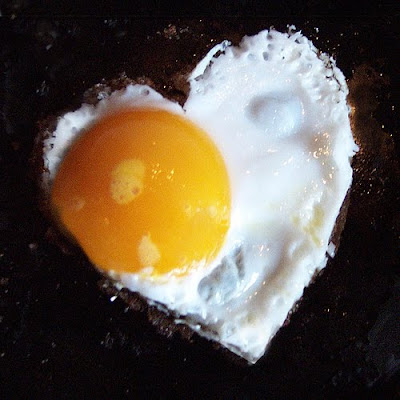 day 28. a picture of you last year, and now. how have you changed since. 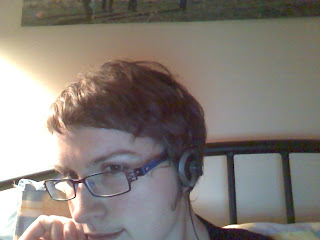 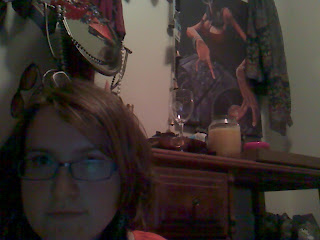 so i guess my hair is longer.

the 'last year' photo was just before i left for canada at the end of june, 2009.
out at mum and jon's place in rockvale, filled with hope and apprehension and absolutely no idea of why i was going and where i was going ... hoping something would change.

the 'now' photo, probably a month ago, 2010.
i guess the main difference is that i'm happy here. and i own a lot more junk jewellry. and a lot more clothing i guess. opshop clothing. woopwoop!!

and between the first and second photos i learned to snowboard.

day 27. why are you doing this thirty day challenge

i thought it might be a bit of fun, something different.

i was blogging a lot more about a month ago. i think it's slowed down because i am working more- i'm putting more mental energy into running the show at work.

i love blogging. i feel like all the friends who inspired me to make a blog have slowed down with their blogs too and i miss their blog entries...

so i am going to pursue this blogging with renewed enthusiasm.
written by helen No comments:

day 26. what you think about your friends

like im going to publish that information online. haha.
i love my friends. i make friends easily but it takes a while before i feel confident to call them 'friends'. however i am pretty free and easy when it comes to adding people on facebook.
it's hard to be away from so many people i love, but the people i'm spending time with here are just amazing, and so much fun, so i've sort of thrown myself into the lifestyle here, hoping for the best.
i think that my friends all know me pretty well. i try to do nice things for people, as i love it when people do nice things for me.
that's what i think about my friends. if you want a personal appraisal, give me 24 hours notice and i'll knock something together for you.
written by helen No comments:

day 25. what i would find in your bag

GET OUT OF MY BAG MAN

so now i guess you know everything about me.
written by helen No comments: 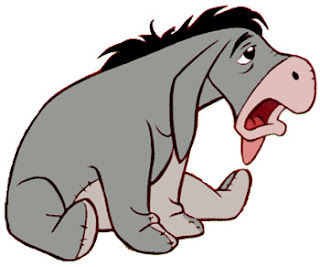 can't decide if i'm sad sack from the raggy dolls or eeyore.
some freakish combination of both.
stupid crappy everything stuff. 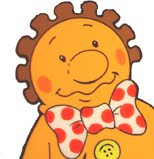 on a Friday: best and worst customer awards

shallow, but this cute guy who i know from SOMEWHERE... who knows where, he probably sells me my coffee every day or something, anyway, he made a big donation of clothes and we swapped clever flirty banter each time he brought another bag in. it's the little things that make the day good.

fail = not finding out where he works or if he's leaving town, or staying here to buy me a drink sometime.

this dude came with 2 couches loaded onto a trailer. first of all i was busy helping someone else and he pretty much stopped me in what i was doing and demanded i help him right away. then one of the couches had a huge tear in it. the other smaller one was sellable. so i says to him i says, "we can take the smaller one, but i'm sorry, with a tear the bigger one won't sell, so i'll have to say no to it". and he says "well i'm taking them both to the dump then", gets in his car and drives off.

fail= he obviously got to the dump and didn't want to pay the dumping fees, so he left the smaller couch with us after all. his fail, not mine.
my fail was not being there when he brought the smaller couch back to give him a smug smile.
written by helen No comments:

sure you've left me with a whole bunch of issues to work through, but everyone's got those.

living in whistler makes me miss you and realise how lucky i am that i genuinely want to talk to you, tell you things i've been doing, share exciting things with you.

not everyone has that.

please give me money for my birthday. lots of money.

day 23. something you crave for alot.

right now, i would quite like to watch 24 hours of gossip girl, uninterrupted. somehow awake the whole time.

a lot of the time i crave glasses of cold milk.

also sometimes all i want is more sleep. 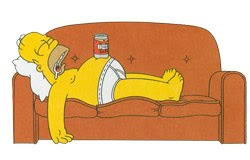 day 22. what makes you different from everyone else

i'm not different from everyone else.

i fall in love, i have warm red blood, i get hangovers, i like brownies, i'm happy when i get my way.

i write and i play guitar. i am a bowerbird collector type.

still this does not make me different from everyone else.

i wear perfume every day of the week. i avoid physical contact. i change my mind all the time. people generally like me but sometimes they forget me.

i never get introduced by anyone.

still, no, no differences to other people there.

i used to feel that no-one could ever know or understand me, and it used to make me melancholy. now i sort of feel that i was hoping i'd meet someone who could read my mind. i think i've grown out of it.

i am not a unique and beautiful snowflake, in the immortal words of brad pitt's tyler durden in fight club.

i'm ok with it.
written by helen No comments:

Labels: all about me, different, humanity

day 21. a picture of something that makes you happy 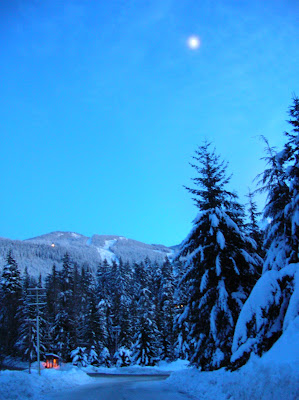 christmas eve 2009.
on my way down to dusty's, my favourite pub in whistler, to drink rum and egg nog with bridget and sam who had just arrived in town.

love.
written by helen No comments:

day 20. someone you see yourself being with/marrying in the future

i may be single for the rest of my life, but if by some freak accident i'm not, i would accept someone who meets the following requirements:

whoever i end up with, and i'll be surprised if i marry them but who knows, they will somehow find me charming. despite everything. all this.

they will, obviously, have a sense of humour. otherwise we'll never last.

failing all these options i will marry chace crawford, no worries. 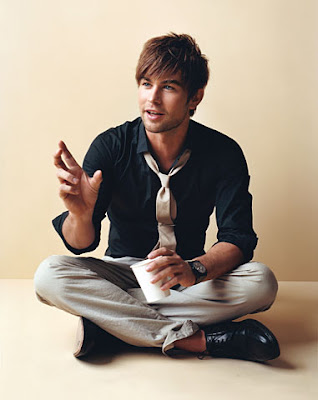 day 19. nicknames you have, why you have them.

i don't have any nicknames.

sometimes my friend kana calls me helenmelon, and i call her kanabanana.

oh, sometimes i get called 'hell' but it never sticks, as i do not encourage it.
written by helen No comments: