when you start to look at your world from a feminist perspective, you become increasingly aware of things that inevitably make you upset, or disillusioned, or downright angry. sometimes, the hardest thing is speaking up.

to put on my cynical hat (which i imagine is sort of part-beret), i'd say that women aren't meant to speak up. not loudly, and not emotively. that's what proves to everyone we're overly emotional, the way we get all angry about things. i do find it very interesting that emotion is regarded as such a negative quality. basically, caring about things is just not cool. when we know this is the way things are, why would we speak up?

a man speaking in public about something he believes in and raising his voice to make a point is strong, passionate, admirable, speaking from the heart. a woman with a raised voice is yelling, a woman yelling about feminist issues is probably crazy.

at this point it'd be ridiculous not to observe that it's not just women who can talk the feminist talk. more men talking the feminist talk helps to pave the way for the change we need. feminism is not a women's issue, it's an everyone's issue.

despite the cynicism beret, i have to say, saying the thing that someone disagrees with is part of the feminist strategy. as a feminist, you have to recognise that silence becomes agreement, as far as your family/friends/workmates/fellow students are concerned. speaking up to disagree is an act of bravery, and although it's uncomfortable, it's also empowering and oftentimes gratifying.

talking the feminist talk is something that's gone in steps for me, and i'll be honest: i have been the angry feminist in the room before. what i've learned from that point in time is that my more radical opinions are best and most effective when eked out over time for the many other people in my life who i love, who don't consider themselves radical feminists (...yet). i've figured out that sometimes it's about the delivery of the idea rather than the idea itself.

all that said, i am also quite into the concept of placards and yelling things, given the right forum.

every day i try and push things a little bit further. i try and learn a bit more about current events. i read a lot, and it gives me points to contribute to a conversation about the things everyone is discussing, be it miley cyrus or sexy selfies or the government's plans to scrap the compulsory amenities fee. i try to represent my own politics in a way that makes me a valid contributor to the conversation. sometimes i get really angry and trip over my words, or ruin my argument by being sarcastic (the sarcastic hat is less of a cynicism beret and more of an akubra).

when i feel i've represented my feminist politics well, and that i've put something into another person's sphere that might not have been there before, that's when the gratifying element comes in.

try talking the talk. once you start, you'll find it increasingly easy to bring things up. i have been rewarded for talking the talk in various ways - a text message from a friend about street harassment because i'm the feminist in the group; another friend telling me that she was talking to her boyfriend about feminism; my brothers and my dad talking about what i wrote in my feminist piece a few months back; facebook friends sharing and commenting on said piece, friends i didn't know had feminist politics at all.

where i'm going with this Friday feminism idea is to ultimately prove that feminism is not just a women's issue, it's not a bunch of crazies, it's not black and white, there are no pre-requisites. all you have to do is keep your eye out for the injustices of the world, big like a third world issue or small like a first world problem. and once you see them, talk the talk and disagree. 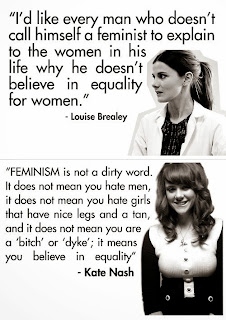 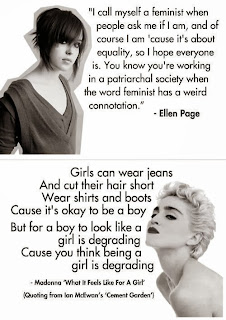