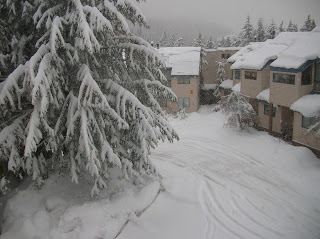 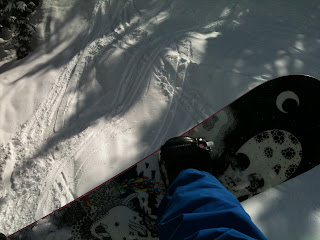 these are two sights i miss... of course there were whole other seasons in whistler, after all i was there 3 years, but it's the snowy times i think of tonight with most wistfulness.

it's actually been a year since i left canada, almost to the day. i read back posts from that time, like this one with all the nervousness and hope, and i'm flung back into it. the feeling of uncertainty in leaving somewhere that you love, where you know the people and the bus route and the best place to drink. i was ready to leave on a lot of different levels, but i can't honestly say that the last few months haven't made me wonder if i should have just quit while i was ahead and stayed put. that's just a wish really, but the truth will set you free, or some such.

it actually hurts me to think about the ease with which my life became snowboard-focused; i have that physical memory but awake from those daydreams to find myself in a place dry of snow. if i think it over now, with the wisdom gained with time, it really was the empowerment of being able to actually do a sport and enjoy it. Until that point in my life, my body was not a physical thing on its own, it was dragged down by all the thinking i've been in the habit of doing my entire waking life. it wasn't much good at anything except for hands to turn pages or wobbly bits to curse in despair or a mouth to make a bit of noise now and then. i used to be all brain, is what i'm saying. for me, snowboarding opened up this world where it actually didn't matter so much how you looked (well, as long as your pants were the right colour and your board had a little street cred) as what you could do. i've waxed lyrical about a lot of the days of revelation i had on the mountain, powder days being the big favourite obviously (read my blog anywhere between mid november 2010 and may 2011 for the full understanding of just how great this all was for me). it did actually change my life, and just the snowboarding would have been enough.

the icing on the whister cake though, or perhaps the eggs that held everything together (not much of a baker; this metaphor has sunken in the middle like a faulty sponge cake) was the everything else. the everything else was mainly the people, partly the view, partly the beer. ah, the beer (i'm still trying to wear off the effects of drinking beer for 3 years solid. i don't drink beer anymore). and the everything else was just right. honestly, there are a few stand-out days for me, but the whole experience passed in a wonderful blur of knowing confidently that there would always be someone to ride with and someone to drink with afterwards.

there were the shitty bits, like being poor or fucking my ankle up or bitchy housemates or that time i left my beer outside too long and it froze, but mostly those things fade into the scope and the colour of the memory i hold dear. honestly, mostly i loved it, and i even knew how lucky i was. that's the thing that gets me about whistler- there were a few complainers but they weren't my friends, and really everyone spent plenty of time and energy acknowledging just how lucky we all were. 'living the dream' is a large category, and you can fit most whistler experiences in there.

a year on, all i have is this lousy tshirt. and i tend to complain, and talk about the good old days,and blog about things i've been thinking about instead of things that happened to me. today, a year later, is i guess a good wake up call to remember why whistler was my favourite place- it's the attitude you take with you.

i'd like to write more about whistler, and i'm certain i will. i started a series of blogs last year called 'things i'll miss about whistler: a series in many parts', but i only managed to get 3 parts finished. there are some unfinished posts in my drafts folder that i hope to breathe new life onto, and with the gift of time perhaps overstate their awesomeness slightly. i'd like to get to that, in fact it's on my writing list now, so stay tuned.

for now, i send love out to whistler and to the people i met there who i miss a bloody lot. to the pow days, to the apres, to the lot of us squished into lounge rooms for pot luck dinners and squished into gondolas heading up the mountain. lots of love going out to you from the comfort of my bed in humble armidale, NSW.

and more to come.
written by helen