secret: all I ever wanted was a fucking mixtape 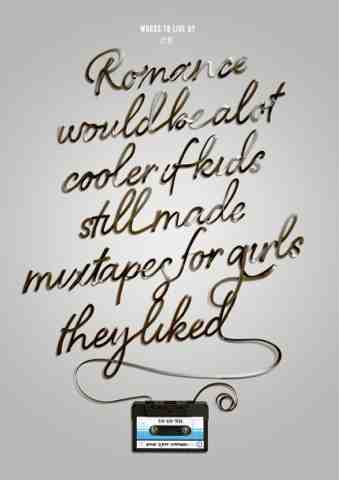 I've realised recently that I have always been the one who makes the mixtapes. Metaphorically and literally. Stay with me on this.

I learned about making mixtapes from my mum. She used to make a new one nearly every month, and would name them as such- I seem to remember the mixtapes of '95-'96 being particularly good. Us kids had the good fortune to be indoctrinated by all manner of music, mostly the awesome stuff.

I started to make my own mixtapes, the first of which I entitled "May '96". Straight from the books of Louise Taylor. Why mess with what works? They were a healthy mix of top 40 pop and actual music stolen from mum's CD collection, and they were all for me.

The first time I made a mixtape for someone else I was 17. Ben was my first serious boyfriend, and I thought he was way too good for me. He also thought he was too good for me. I made him a few mixes which were filled with not-so-secret messages of love. Each track was carefully chosen because it made me think of him. But then, I was 17 and in love for the first time- everything made me think of him.

Needless to say that one didn't last.

Over the years there have been a few other mixtapes for a few other boys. I've made mixtapes for friends, and done my best to pick songs I think they'll like rather than my favourite songs, which is an easy direction to take.

I've worked so hard on musical collections to show other people I love them with music far better than I could ever write. I've borrowed from many of the bands I know to leave not-so-secret messages of love out in the air to be heard.

That's what I mean about metaphorical mixtapes. All the effort put into trying to know someone and give them what they want without them having to get off their lazy butts to ask.

My point, no matter how long-winded, is that I'd love a mixtape that someone had made for me with me in mind. And all the subtext that goes with that.

For now, I'm making my own mixtapes/playlists. It goes alright- I know exactly what I like. I'll just keep quietly making them until a fresh new mix comes to rock my world.

For now, May 2013 is pretty fucking kickass.