i was once one of those who could name drop with the best of them. music was sort of my thing, but not in the hipster way of knowing of bands before other people did. i just knew the bands i knew, and i loved them. the christmas i got a cd player was swiftly followed by the year i got a weekend job, and then nobody could stop me; i earned $40 a saturday and it went straight to cds. i'd either shell out for one new release or i'd get away with 2 or 3 $10 classics. i had a few years of disposable income which went to those shiny plastic discs which are so outdated now. i still have most of my collection, i suspect it was canibalised a little (or a lot) by my ex who had the duty of 'minding' my collection after i abandoned him. some of my favourites (or, his favourites) are missing. i don't mind though, i still say i got the better end of the deal; i got Canada.

i used to be a lot more of a music snob than i am now- i got past the point of hating things just because mainstream radio thinks they're catchy. i'd still rather support talented musicians, especially ones that i know, because i think the ability to create something is still underrated by many people who really should know better. recently i've supported the imprints, more recently second hand heart and am looking forward to supporting the flailing inhalers sometime soon. i'll see the imprints launch their latest work shortly, and it's music i got to help to make from the comfort of my own living room.

i've been trying to see more live music since i've come back to australia. as a teenager, trapped out in the country and misunderstood (either that or listening to way too much radiohead) i always assumed adulthood would bring with it a huge amount of live music, all those bands i'd loved so faithfully becoming more than just sound blaring out of my shitty portable CD player. i lived in melbourne and managed to see quite a lot of live music almost by accident, in account of the fact i lived with 3 studying musicians who always seemed to be practising jazz standards (love you guys!). but i didn't see the bands i expected to see, and thus i learned the sad reality that it's a fucking long way to australia from anywhere else (UK, USA, Europe) except for australia. as a student the pricey big shows i was so hot and heavy for remained a fantasy.

on returning to OZ and procuring full time well paid employment, i've definitely seen more live music. i loved the gentlemen of the road tour hosted by mumford and sons, and i felt super cool at sprungfest, finally getting into the vibe of a good old-fashioned hiphop show- actually, australia's first all-aussie hiphop festival. i fell in love with hilltop hoods all over again.

i hold a lot of respect for the power of live music. it can consume you; it can hijack whatever else is going on in your night or even in your life, and show it from an angle you haven't seen before. seeing people i know perform gives me even more of a kick; that weird pride you have when someone you know is kicking ass and even though you've had little or nothing to do with it, you're still proud like a parent. i get goosebumps when people i know are performing, as a strange reflex. i kinda like it.

aside from live music, since moving back to the country and having some wheels, i've been really enjoying the simple pleasure of pumping the tunes in the car on the drive to work. i have a few long-burners that i'm always in love with, but recently i've put them aside to just focus on falling in love with the new music that's come across my path, either by way of curiousity or recommendation. let it be noted that when i say new music, i mean new to me. i'm working on catching y'all up, but i'm still about a year behind what's hip these days. sometimes i think i'll never catch up. sometimes i wonder why i'd want to.

so i wanted to share my faves of today with you- i love them for various reasons. apologies there's not a lot of happy pop being suggested, it's just that there's not.

And it might blow up but it won’t go pop,
And it might blow up but it won’t burst,
She said she might grow old but she won’t grow up,
Well she might, but only if I go first.
She wears her heart on her sleeve like she’s wearing a patch on her shoulder,
It’s not a matter of whether I can catch her, more a matter of whether I can hold her.
She thinks out loud, she’s got me; she laughs with her whole body,
I think about how she's got it all figured out and wonder why she’d even want me?
Each night I find it’s the same old, when I crawl inside in the evening,
I lie down next to an angel; fall asleep and fly with my demons


boxing night- frightened rabbit
... listen i just love scottish accents. plus the dude's got beard for days. it's from an ep; they've since released an album that i haven't gotten into yet. this one's it's a nice old breakup song, really:
Well the clock just stopped
You can cut that into my headstone
Won't something move so I stop staring a hole into the phone?

summertime sadness- lana del ray
i've had a lady crush on her ever since i heard her interviewed on triple j and she just seemed like this genuinely cool person who i'd like to be friends with, which logically leads to a crush, as that's how my mind works.

i'm into you - chet faker, an awesome aussie artist; i've been listening to his ep a lot. of special note are the cover of no diggity and also cigarettes and chocolate. very nice indeed.

king- thelma plum - can't find a copy on youtube as it's off a pretty new EP, but i really do love it all- father said is the single that won her triple j's unearthed and it's pretty cute.

wish you were here- lee fields & the expressions
i actually shazaamed this right off the tv show 'suits', which i love. mainly because i love harvey spector. but the song is also a lovely one.


and listen, i can't not love macklemore. this show is awesome.

my confession to you all, as a way to end this post, is that i wish i could rap. i'm pretty good at singing along with other people's songs, but i just can't rap on my own. i'm too white and lacking in rhythm. it breaks my heart, every. single. day. 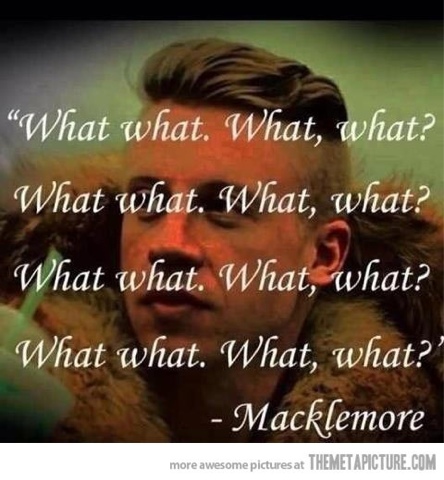