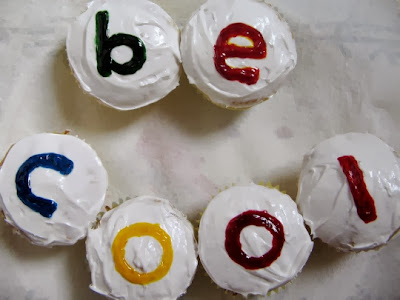 i would like some 'be cool' cupcakes. i reckon they would make me cooler. as long as they were gluten free, otherwise they'd just make me sick in my tummy.

if it was as simple as eating a cupcake or two, imagine how much cooler the whole planet would be. no conservative, money-grabbing politicians. probably everyone would bike everywhere, or drive renewable energy cars. there'd probably be no plastic bags, no clothes would ever need ironing. women would work alongside men in the highest-paid positions; men and women would be able to take paid time to care for their kids when the need arose.

you could walk down the street in the dead of night in the highest heels and the shortest skirts (if that was your thing, because i prefer knee-length and flats, and i want to be cool too) and not worry about being safe. you could leave your kids in the hands of pretty much anybody and know, for sure, that they'd take care of your children.

if everyone would just eat a 'be cool' cupcake, it wouldn't even be a thing that some people look different to other people, some are fat and some are thin, some speak different languages and have different beliefs. that would be fine, and merely a point of conversational interest at the table. countries would help each other out, and no leave people floating about in the sea on boats, pretending they don't exist.

there'd always be allocated sleep-in days, and plenty of good coffee to go with those cupcakes.

man, it would be good, if everyone would just be cool.