This one is just a very brief one on stationery.

I have gotten into a bit of a habit with collecting cards. I'm getting quite a good collection now. I tell myself that they're for backups, or for later, or for emergencies. There are many many awesome cards out there in the world- I like blank ones which can be sent 'just because', but if it's a cool graphic or a funny thing (in my rather loose concept of funny things) I will generally buy it and save it. For later.

I know I'm kidding myself- the reason I know this is because sometimes I like to get out the pile of cards I've purchased, still blank, still waiting to be scrawled on and sent off into the world, and just flick through them with a happy feeling in my heart. That's how I know they've become another thing I collect.

In Brisbane this extended weekend I have found a few more to add to the collection. I'm going to try something different this time- I'm actually going to post at least one of these out into the world, because I bought it for a person in particular.

What I'm hoping, by sharing this particular habit of mine with the greater Internet, is that someone might write back and tell me they're quietly doing the exact same thing. On the Internet, though- not a card. We're saving those. 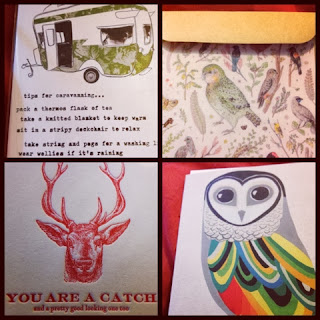