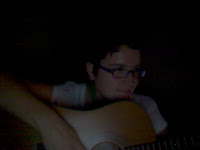 i like to play guitar. mostly i am alone in my room pretending to be famous, but just occasionally i actually play in front of people.

i have terrible stagefright. and truthfully, my guitar playing is not that good. but it is a small joy in my life.


i like to play guitar with nick and damen, but damen is leaving for texas. the sad thing about this place is that people are always leaving, just when you are starting to get used to them. i loved those times of guitaring with nick and damen; at their house, on my deck, by rainbow lake... normally it was more about the beer and the joint than the guitar, but they were sweet company nonetheless.

my guitar is about 4 years old now, and i bought it for myself coming out of a terrible breakup, where i was left with heartache and money owed- of hard-earned $2200 scholarship money that semester i had a mere $400 to spend on myself. so i bought a guitar, and played it alone in my flat with the door open to let the hot melbourne summer air in, drinking beer and contemplating all the possible ways in which i would allow myself to be different.
written by helen