secret: everything was beautiful, and nothing hurt

It's nearly the end of April. Our family beach holiday has set us down by the Pacific Ocean, a salty liquid body that laps up upon other shores far from here.

There's been sun and pleasant weather for days on end, an array of foods, coffees and beverages. Sometimes too many of the red wines, but their medicinal quality by way of sleep excuses me from having to justify them. Perhaps it doesn't, actually, but with incredible strength of character I might save that chestnut for another day.

Large expanses of water seem to make me rather pensive. I've been working the contemplative stare into the ocean in a big way this week. I like to think it makes me appear mysterious and beautiful, like I'm a girl in a movie. I've figured things out too, so it's not all for show.

For instance, it's a lie that everything is beautiful, and that nothing hurts. But it's a beautiful lie; a motivation, a goal. Sometimes I wonder if my little brothers have made it there. For my brothers, life is a series of selfies in amazing places, beers, beautiful women and adventures. I don't think I'm them, though. My abs are not anything like their abs.

I've been thinking today that I fancy myself as a romantic. I've been pissed off for months now about how sensibly my last relationship ended. I made a somewhat adult decision and now instead of trudging through an increasingly shitty deal, I get the chance to be free and happily single. It sounds good, and it probably will be, I just have to adjust my idea of myself from someone who believes in love above all else to someone who believes in myself above all else. And that's an idealistic love situation too.

Self motivation comes across as a bit hokey, but I think I'm sitting peering into the Moment of Truth, that precipice of adulthood that not even all adults get to, and I'm just trying to give myself the nudge to jump. Actually, that's a terrible metaphor, but that's all you're going to get.

I think I'm going to shoot for Sensible Romantic, a Romantic of the kind that can draw on an oversensitivity to melancholy to write and create, working in and allowing for some poetic staring into the night time ocean, hoping I get a chance at love that makes everything beautiful with nothing hurting.

The Sensible part is the part where I hold down a full time job while working towards a Masters, rid myself of the headaches and weak ankles, maybe pay a bill on time, be a friendly friend type, and save money for global adventuring.

All this staring at the ocean has set out these parts to myself in a comprehensible fashion, given me a deep breath in and a goal or five. If I breathe out a quiet "everything is beautiful and nothing hurts", then time by the beach has been time well spent. 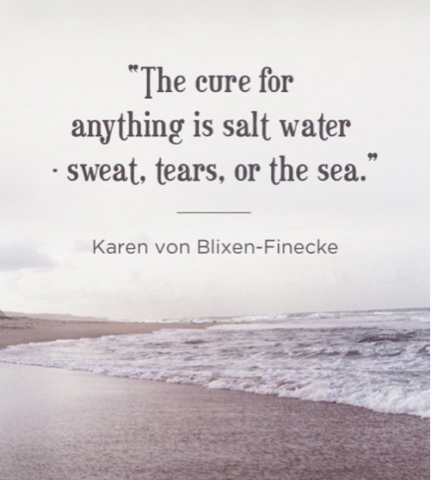