secret: i rode on Thursday and I liked it (to the tune of Katy Perry's "I kissed a girl") 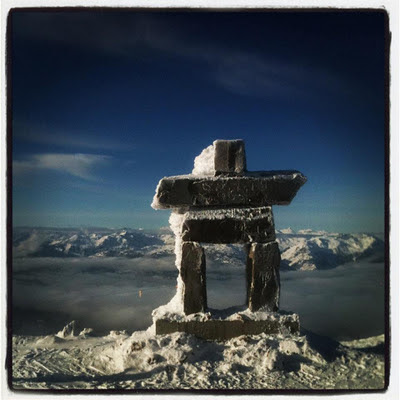 nawww, i just love the mountains. they's all purdy and whatnot.

i've missed the first month of riding for 2011/2012 season. own fault. but i've suffered- i've missed the feeling of a board beneath my feet, the wind rushing by, the joy of a simple turn...

i haven't missed chairlifts, but that's neither here nor there.

i snuck up the mountain on thursday morning for a few cheeky runs, to get amongst the 8cm of new pow (some scoff at 8cm, but after weeks of nothing, it starts to look not so bad). hard not to get excited, logging day 3 of the season (count 'em: 1 run opening day, 3 runs on icy groomers monday) with some favorites: Cam, Karin, Phill, Mitch and Sandra.

We hit up Dave Murray, fresh pow on top of groomed run; my legs ached already (yeah, i have a bit of work to do), then Jolly Green Giant with a brief diversion through some tiny trees. This run I remember from that other time early season 2010/2011 when Phill and I got a little... ahem... caught up. It was nice, fairly soft on top, fresh tracks to be had, little bumps here and there for those so inclined towards getting a little air...

Bless 'em all, they waited for me at the chairlifts, and that's why the love I have for these folk is huge. I'm not a speedy rider at the best of times, but things are proceeding in a fairly cautious fashion (swallowing pride for the sake of posterity) and I'm lagging behind. I'm ok with it.

A catchup with Sandra was next on the list, and we snuck down Orange Peel this time (slowed down by a gaggle of small skiing children complete with ski school instructor giving me the evil eye, because as a snowboarder, I am obviously intent on running down those smaller and less able to defend themselves).

Quality chatting on Red chair revealed that Sandra hadn't had the pleasure of being up on Whistler Peak yet. And godDAMN it was beautiful up there; my first visit of the season and the clouds cleared to give us a view right to Black Tusk, as well as up and down the valley, a nice blanket of cloud cover making for some rather satisfactory if obligatory photos of the inukshuk.

Upper Peak to Creek was splendid, even though by this time of day it was a little lumpy in spots. I managed to find a few bits and pieces of soft fresh snow on the sides of the runs to keep me happy, but my guilty conscience was starting to suggest to me I shouldn't push my luck with the stupid ankle (as it shall henceforth be known), so I called it at 4 runs and downloaded to Dustys. A burger was had. It was delicious.

It's nice to be back, even if in small quantities. I want to be better. I want to be healed, but I'm not yet. So I shall take those small moments of joy and amplify them for my own selfish reasons.

And that's how my day of riding was on Thursday. Thanks for asking.
written by helen