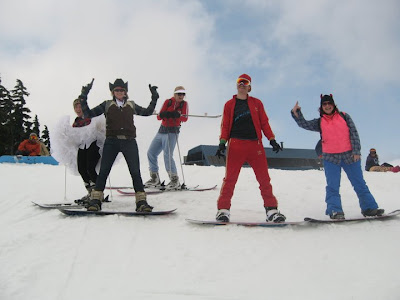 it was weeks ago now, but it was a day worthy of a blog.

this season has been a gift. each and every day up the mountain was spectacular in its own way. there were so many powder days. and even though by the end of the 6 months my body has repeated complaints for which i really should seek professional attention, i remain irrevocably in love with the mountain. yep, even though it kicked my ass.

the trees... oh my, the trees. emerald trees have a piece of my heart. so perfectly silent, and still. i had a day in those trees on my own, and i would have done them maybe 10 times over, still at the end getting fresh tracks, only one time seeing anyone else in there. the way it makes me feel to think about that experience is pure happiness, with a tinge of excitement. like being in love.

insane really. nobody could have made me believe, 2 years ago, that i would speak that way about an outdoor activity done in wintertime. foolishness! strap a piece of wood you've paid over $400 for to your feet, launch yourself down a steep hill, fall repeatedly into snow in minus degree temperatures, and laugh delightedly when the snow hits you in the face?!

gaper day started with eggs benny at riverside cafe. 2 for 1 eggs benny, to be more precise. with the orangest yolked eggs you ever saw... free range deliciousness. oh eggs benny, you are the perfect breakfast. sometimes i even have you for lunch... but anyway that's not the point.

i breakfasted with kate m, kate j, phill, annika, and mika who came over just to eat breakfast with us then went back to bed (she gets extra points). after this there were caesars upstairs, and possibly a beer, who's counting? we all wore funny things. kate and phill rocked white trash, kate m was the ultimate cowboy (jeans, on the mountain. crazytown), i wore brightly coloured stuff... yeah so mine didn't really have a theme so much.

when we met up with karin and taz in the village our party was complete. the blueberry shotski helped things along- for those of you not in the know (and i say this with a tinge of pity in my voice) that is a ski with 4 shot glasses stuck to it... the glasses are filled with jager, and then you organize 4 people alongside each other, or if you're in a gondola you can squidge them, i've heard... and then you take a shot.

we were all so excited to have a shot from the shotski that we'd all had one by base 2, when we hurried to hide the evidence. which we did, excepting the uh... large bottle of jager sitting right in the uh... open doorway as we went by the lifties.

but they must have been on our side, because nothing was said. they were probably so unsurprised that not even eyebrows were raised. those lifties have seen pretty much everything by the end of the season.

a personal joy of the day was getting to meet one of my brother's best mates, gianna, who i'd been trying to see since months ago when her and her husband moved to vancouver... we may have only done a few runs together, but they were quality. i think they were anyway; drink count was on the way upwards by this stage.

we did a run with the rest of those drunken monkeys on the mountain to celebrate gaper day in the most festive way, taking over the slopes. there was a lot of onesies, there was a person dressed as a banana... basically there was nearly everything. kate has uploaded a fantastic movie that phill took of a run, which reduces me to a puddle of giggles every time i watch it, mainly because it briefly touches on so much of what made it an awesome day. the drunkenness, the terrible attempts at jumps and 180s, the constant effort needed not to stop in front of everyone else, as you would inevitably get sprayed... also those vague but familiar home-sung notes from 'barbara streisand' by duck sauce, previously made famous on such occasions as Australia Day.

i fell. i fell hard, and i fell often. i re-busted my shoulder (afore-mentioned injury needing professional help at some soon stage) which i failed to register at the time on account of the uh.... well let's be honest, i was feeling no pain.

a formal apology needs to be made to fabel, as i just recently discovered i am responsible for twisting the fuck out of his knee (medical terminology, look it up) by tangling our boards on a chair. i am really sorry, and any flippancy on my part at the time was probably just because i'd been drinking. sorry buddy.

everyone was just out for the fun of it, and it really was fun. to spend the day with old friends and new, riding round cheering and hitting/ attempting to hit things we really shouldn't, drinking beer on chairlifts, even managing to get sunburned a little...

we sat a while at the slushy 'skimming' pool and watched people attempt to make it the whole way over with various degrees of success... phill got his ass out (complete with smiley face lovingly drawn by kate) and then got really cold and wet. which is less sexy than it sounds. also some quality video footage to go with that one, well, the video itself isn't much but the audio is fantastic... a lot of groaning, followed by "guys... a little help", followed by (imagine a very polite tone of voice) "could i trouble you for a shot of fireball sir". phill you are a genius, and don't ever let anyone tell you otherwise.

by the time i left the hill i was exhausted. still, we managed a brief apres, joined by fabel who it turns out was really only after a toonie for the bus (i guess that's the price you pay for fucking up someone's knee, i say i got off cheaply), the gorgeous karin (mainly because i dared her to come) and nicole, who sadly missed the day for no good reason (work) and then promptly procured yet more alcohol on the trip home.

fair call to her, but nicole didn't let me sleep and i was bone-weary and threatening to sober up. she's lucky i didn't cry, i could have cried. but i didn't, instead i showered and chugged my rockstar ("medicine") and then off to the swedes for a swede/sweet (see what i did there) houseparty!

i had to spend the whole next day at home laying down, as it turns out that yes, i did hurt myself rather badly, and didn't have the range of motion required to put on a bra, thus limiting my options for social interaction. i think my body was just in general shock.

all in all a grand old time. there are so many little things i'd love to elaborate upon, but instead i shall hold them to me as treasure, a secret to be repeated to myself like a mantra, to get me through until next season, when i intend to do it all- and more- again.

kate m, kate j, phill, karin, taz, gianna and renee, fabel, charlie, ben, mark, everyone else on the mountain with me that day, and then nicole, mitch, annika, lisa, maria, andy, sue, ben l... anyone i rode with this winter who made every single day the best day. this season is going to be hard to beat.