travel: armidale (scene of the crime) 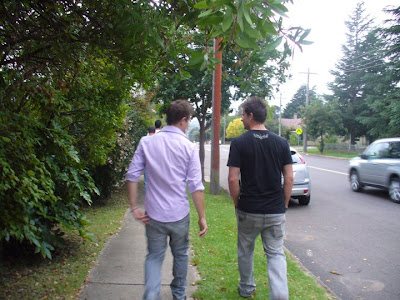 i really don't know what to tell you. shit got epic.

this is a snap i like of us making our way down to the wicklow hotel in armidale, nsw. these boys had already been working quietly on a pub crawl since 1pm. just ahead of them, which you can't really see, are cam, scully and evan. ex-whistlerites. and 'whistler loose', a particular type of looseness, was on the cards.

after the newcastle weekend, we dragged our sorry selves back to armidale, more specifically, kentucky, to the house i grew up in. i mowed the lawn, i watched many movies, i even got to sit inside watching a thunderstorm and listening to the rain on our roof. fuckin' a.

the thing i love about being in the house i grew up in, even though different people live in it now and it smells different, is that i can walk around in pitchblack dark, and find my way to my room. i got to sleep in my old room while i was there; it was finally free after all my brothers and stepsisters moving through it over the years since i moved out. i love that room. i painted and wrote and drew all over the walls when i lived in it, and though it's all been painted over now i'm pretty sure i can still feel the teen angst. fuck did i listen to a lot of radiohead in that room.

cam and scully arrived friday afternoon. stu and i had prepared for the occasion by buying a carton each of pureblonde white. a carton in australia is 24 beers. between two cartons, there were 6 beers left in the morning.

hangover. that is all i have to say about that. also, there was a slug from the garden in my bed.
the party was preceded by a pub crawl through armidale. highlights include the kilda, where i was the only female in the place besides the staff, and who could forget that time when we were in the hotel room getting ready and evan cleared the place with a terrible horrible fart... looking back, sharing a room with 6 boys i was basically asking to be gassed. the party was lovely, with many many family and friends i hadn't seen for ages. while everyone is always interested to hear about whistler sometimes i feel like they don't really get it, which let's face it, you can't unless you've lived it... or survived it is maybe a better way to put that.

there were so many people there to celebrate with us, all there for hugh, because hugh really is amazing. i have so much time, love and respect for that boy. i am incredibly proud to have such awesome brothers, and they were basically at their best that night. even at their silliest they are a billion times cooler than i will ever be. basically i just brag to everyone about how cool they are and funny things they've said, and hope that i can be vicariously cool through them. mostly, that works.

the next day, minus scully, evan and andy, we went back to mum and jons and drank our way slowly through a good portion of his homebrew. quality couch time with stu, hugh and cam was basically the perfect end to a perfect weekend of steady drinking.

i like armidale, but i don't love it, and as a place the reason i want to be there is the people, and the two houses they live in. it seems a little colorless compared with the mountains and the snow and the life i live in whistler. but maybe i'm just not ready for armidale yet.

it was hard and horrible to say goodbye to the people: the brothers, the parents, the step-parents, the step-siblings. i don't really know when i'll see them again. but you have to do it i suppose, say goodbye, and try not to think about it too much... denial: the ultimate coping mechanism.

so i guess really what i learned by being in armidale, the place where i spent the first 18 years of my life, (if you've made it all the way through this increasingly lengthy post i applaud and thank you) is that home is where your heart is. my heart lies in the mountains of british columbia, for now, and there's nothing to be done.