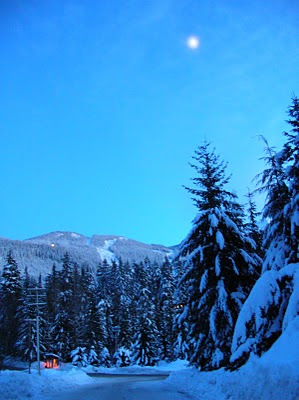 i have used this photo before, but i love it so much. it's a christmas eve photo.
it's beginning to look a lot (fuckload) like christmas round these parts. there are enough fairy lights to run several small fairy cities. it's like whistler can't get enough. christmas on fucking steroids.
a terrible side-effect of christmas is that the village of whistler fills to the brim with damned tourists, spending their holidays here, and lining up at OUR chairlifts, taking all the good tables at OUR bars... fuckers. i had a burst of outrage tonight (internal... i don't really make scenes) at the full buses, the traffic everywhere when none of the bastards can drive... then i realized that maybe if the tourists didn't come, i wouldn't have a job. duh.
to ponder a little, if i may (and yes, i may, because it's my blog and i'll ponder if i want to), i think that north america is way bigger on christmas than australia is. is it a northern hemisphere thing? is it the white christmas factor? coz, holy crap, there is a lot of christmas in the air.
i love this time of year, but can i tell you exactly why? obviously being mostly atheist i am not really about the birth of christ. what i do like, however, is the excuse for excessive consumption of everything... foods (ham, turkey) and drinks... oh boy, what i wouldn't do to a rum and eggnogg right now. mitch and i had an pretty sweet drinking session with the rum and eggnogg the other day. he's replacing my little hugh, who i love the shit out of (that expression is just so i don't seem too gooey) but who sadly is not here to be my drinking buddy like he was last year.
so we've all got it down. i like drinking. i like it more when it's appropriate, but then, i do live in whistler, where most of us have a little bit of a problem saying no to alcohol, thus making it almost always appropriate.
but listen kids, and listen good. the reason for the season: the snow. the white stuff. that's the good shit, i waited 6 months for it and it has not failed me yet. that's the reason i really love this time of year. snowboarding, friends, apres.
all i need now is a kiss under the mistletoe, or on the chairlift...
written by helen