i am well aware that it's a little bit gross to post a picture of your boyfriend as your favourite thing. i mean, what am i, a teenager? what's next, those nonsense sums you do to work out how compatible you are with someone else as a percentage? don't i know boys have boy germs?

having a boyfriend, or a partner (as the grownups call it) is one of those funny things in life. i've had a few different ones so far, and a list of a great many who i'd have liked to call my boyfriend. after my last one didn't work out, i decided to settle into singledom in whistler, a place where (i believed) relationships based on love and mutual respect could not flourish, unless you are kate and phill, or mark and lisa.

actually, more relationships happen than you'd expect, but there's also (and excuse my bluntness here) plenty of whoring about. an excess of endorphins, alcohol and party drugs, combined with a general sense that nothing that happens in a whistler season is applicable in the real world, leads to many many walks of shame.

i barely ever dabbled in walks of shame myself. i instead fell in love with the snow, and the place, and the lifestyle filled with friends and extreme sport activities. wholesome stuff, you know? i sat back and appreciated the cuteness of boys in outerwear and toques (for boys they all were), did whatever i wanted nearly all of the time, and liked the freedom of it. no walks of shame, just tired and slightly drunk walks home from the hill or the bar or a potluck dinner, filled with shiny joy at falling snow and at the good in simple things of life.

the happy thing that happened next was that a person came along who i really quite liked, who for some reason also seemed to be quite liking me. and the very best part was that i still got to do all the fun stuff that i liked, without compromising my freedom or my friends or my energy and space. the second-best part was that he laughs at my jokes. if they're funny, anyways.

we had a lovely summer, followed by a tough winter when it became clear that due to my ankle injury i would not be one half of the most awesome snowboarding couple of all time. that was a struggle and somewhat of a black mark, only in the way of it necessitating the painful readjustment of expectations. not always so good at change, me, but i beg my humanity as an excuse there.

there were other bumps, like his inability to procure another visa for Canada; the making and breaking of plans, leaps of faith where people put others on planes not knowing when they'd get to see them again... just the regular stuff people do when they're in love and live in different countries.

anyway, not to spoil the whole story for you or nothin', but he's here now, in my house and my proximity, and my arms and my thoughts and all the places. i'm happy in a way that (mostly) makes allowances for the fact we've never lived together before and both have quite the propensity for moods, of all different sorts. true to form, i try to make him think what i think, and he just thinks what he wants to think; i keep trying to make jokes he'll laugh at and he keeps only laughing at the ones he actually thinks are funny; i keep forgetting my toothbrush when we go places and he keeps packing it for me; i keep making plans and he keeps up with me. 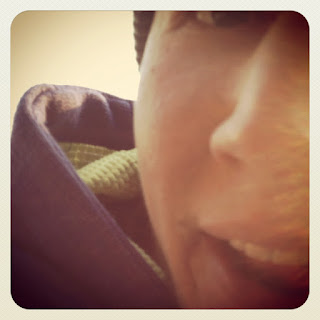 he really is a favourite thing, my person. and i still like him, and he still likes me, which i think is something of an accomplishment. and that is all i have to say for now about one of my favourite things.
written by helen