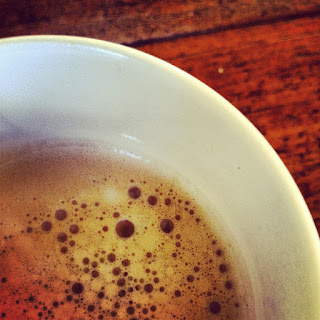 i have this sort of dependent relationship with coffee. sporadically i give it up, having become alarmed by my dependence, by the sometimes unreasonable expectations i have of the relationship, and also sometimes it's because i've read some sort of literature that convinces me it's killing my body very slowly from the inside. quite separate to that, announcing you've given up coffee always elicits some sort of reaction, whether it's horror, puzzlement, or on some rare occasions, you get someone who supports your choice (someone who has clearly been reading the same things you've been reading. someone who likes to rant in tones of superiority about health benefits).

my point being that coffee is one of the enduring loves of my life. my favourite coffee comes from melbourne, where the italian influence in carlton (which backs onto University of Melbourne, that place i went once) makes everyone a coffee conniseur, with an opinion on everything. i knew a guy who took a coffee course once, whos family started a cafe, and this apparently made him an expert on coffee. what a drag! everywhere we went together, my eyes would be rolling back in my head with the joy of the delicious coffee and he would, without fault, find some element to criticise. every. single. time. i think there were 2 cafes where he approved of the coffee, and one of those was his sister's place.

we're not friends anymore, but rest assured the fall-out was not only about coffee.

my favourite coffee drinking times have been worldwide. annica made a damn good coffee in whistler, and always seemed to have a sixth sense about when i really needed one. in highschool, kat and i used to drink too much coffee at caffiends in the mall. height of cool = a big betty blue sized mug of milky coffee.and hanging out outside, where people from other schools could watch and be watched. i drank a solid amount of coffee at uni, between castros kiosk, where the lovely opperman girls both worked at the time, and a cafe on lygon st in carlton, name of which has been lost to me (but i can tell you exactly how to get there).

i've had long cups of coffee on my own in creekside starbucks, cursing my ankle and trying not to cry about missing pow days, i've had coffee on the go, rushing to work or a lecture, i've had coffees with friends in need of a chat, i've covered all the problems of the feminist world over several lattes (yep, it takes several). i've had awkward coffees, when you're relived it's an easy temperature to drink and run.i've had coffees right before awful, sad and tearful goodbyes to loved ones. i've had bottomless coffee from southside diner in whistler, and let me tell you, that will wire you right up.

i often think about the taste and the smell, but the colour of coffee is one of those lovely ones, a warm and comforting colour. there is nothing so reassuring as a good cup of coffee.