while there was a car at (sort of) my disposal last week, it made sense to travel about the countryside and see some things and stuff. kate, phill and grace were in oregon with me all of last week, so we took the opportunity on thursday to venture towards the ocean.

with kate having studied some maps on the interweb plus a little bit of luck and a sense of adventure (and optimism) we set off with the intentions of visiting a brewery and seeing the sun set over the ocean.

a few u-turns and some sheepish laughter later, we found ourselves in eugene, where ninkasi brewery lives. they were practically giving the beer away at $5 for a 5 sampler tray... yumyumyumyum... 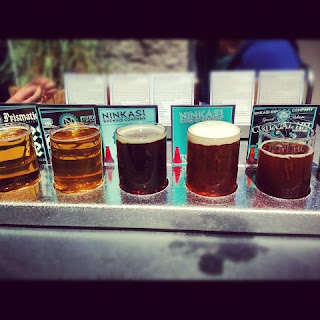 i'm quite partial to the more hopsy of beers; IPAs and double IPAs. top vote for me was the tricerahops (see what they did there?) double IPA. the believer red ale is also pretty darn good, even taking into consideration that moya has biased me with her own preferences. we had a lovely old time sitting in the sun, pretending to be beer experts. then we bought tshirts which totally ruined our cool factor, but we'll be cool wearing them in australia... winning.

after blowing a wad of cash on souvenirs we went for a very wholesome and tasty lunch at a bakery nearby, and then onto searching for downtown eugene, to get some local culture up us. no luck though, and i'm sure we just weren't looking in quite the right spots, but we drove away empty handed.

onto the coast, through some stunning back roads... the forest is so green you need sunglasses, the road twists and winds its way to the ocean. and when you get there, and step out of the car, it's... fucking windy.

yep, you heard it here first folks, windy windy ocean. lovely to look at from the warmth and safety of your vehicle. i enjoy nature more when it's not whipping sand into my legs and ears and mouth and eyes. after looking around outside very briefly and stopping to use the washroom (pit toilet... who even heard of that anymore?!) we drove on along the coast, north to newport. we passed a sea lion cave, all organized for humans to look at for the small fee of $12 admission- no thankyou- we saw some more amazing coastal scenery from the safety of the car....

we ate dinner in newport after seeing a real live sea lion for free, just off the dock. all sorts and flavors of seafood were on offer. we ate several. whoever invented things wrapped in bacon as a concept, i take my hat off to you good sir.

the sunset, which we tracked down a pretty good spot to see, was lovely. well, we didn't quite make it to the part where the sun hit the horizon, mainly because we were all in the car on account of the windiness, except that after dinner there turned out to be quite a lot of wind inside the car also, and sitting in a car full of fart loses its charm quite speedily. 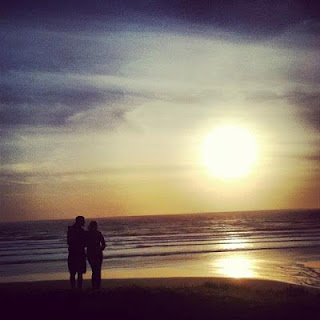 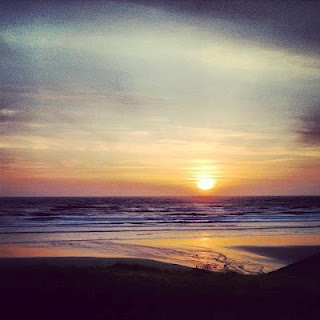 so we wound down the windows a little and left town. there is something lovely about winding your way through the darkening forest with mumford and sons playing. especially when someone else is taking care of the driving part, and you're simply looking out the window, singing along to the music and daydreaming about whatever it is you're most obsessed with currently. for me it's picking people up from airports.

i love day trips- when you arrive back at the place you left that morning, and things have happened to you, but you still get to crawl into your cozy bed at the end of the day. bliss.