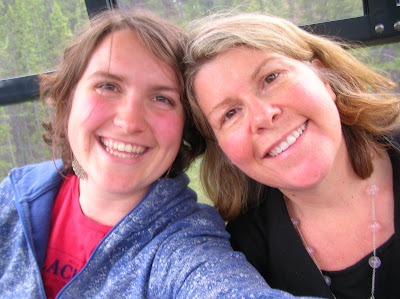 it was mother's day on the weekend. hugh won, because he had a bottle of moet chilling to greet mum with upon her arrival to brisbane.

me, well, didn't even manage to talk to her on the actual day- although in my defense, i talked to her on canadian mother's day. and i'm basically a canadian. well not really. but yeah.

so hugh totally won. but he doesn't have a blog, and mum has just started reading my blog, so i shall have my revenge...

the photo above was taken on the banff gondola, in summer 2010 when mum came to visit me in canada. to tell the truth i didn't think she ever would, but i guess she was faced with the prospect that i mightn't be back in aus for a while. it was a bit of a funny summer, not terribly warm until july when mum got here. blissful two weeks off.

we went for an adventure. we hired the ugliest car known to man, we booked hotels, i spent lots of time on google maps "planning" things (part of the fun of the holiday is looking forward to the holiday) and then off we went...

once back in whistler, we spent a few days chilling on the couch watching grey's anatomy. i have never been so proud to call louise taylor my mother as the point where she commented "we're out of beer... better do a beer run".

there are many wonderful things about my mum, the least of which is how much she loves us all, even though we're all alcoholics who like to wrestle in public places (more stu and hugh than me). she is the most dedicated, compassionate and generous person i know. i am honored to call her mum.