whistler has a huge australian population, mainly because

b) australia doesn't have mountains like this, but for some freakish reason we all love snowboarding

c) it's a party town, and we sorta like to party.

so on australia day, residents of whistler fall into two categories: Go Hard, or Go Home.


we started out the night before to celebrate the triple j hottest 100, an annual countdown that happens on australia day in australia, which means we were listening to streamed radio until some ridiculous hour of the morning.


i was rather pleased with number 1, as i lurve Angus and Julia Stone. I saw them play in Vancouver in dead season with Keltie and Nicole (loveliest housemate of all time) and i loved them even more, and that love grew and grew, so that when they won #1 with 'big jet plane' it was quite an emotional moment for me. julia stone is so gorgeous, and angus is all quiet and cute, and you should go to youtube and look at them playing big jet plane live:


so now you can love them just like i do.


after this victory of sorts (it is always cool when an aussie band wins the hottest 100), we struggled out of bed the next morning for the offical 26th of jan, the whistler aussie day.


Initial plans to meet at 8 were nixed and replaced with plans for a 930 rendezvous. so factor in a hangover or seven and 10am saw us making our scraggled way up the creekside gondy: 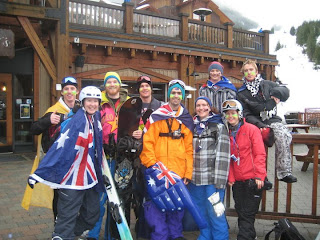 as much as they used to make me cringe in my previous life, i am in fact wearing an australian flag. the inner snob in me still finds this more than a little embarassing, but the larger, more brain-damaged-by-alcohol part of me says, "fuck it, when in rome ...".


let everyone please note that mitch's inflatable aussie flag hand was MINE, and he stole it from me after pretending he was helping me out by "holding it". 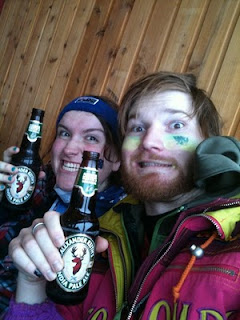 drink of the day goes to my double extra spicy caesar at roundhouse, because godDAMN do they know how to make a caesar... anyone not in the know, a caesar is a canadian bloody mary made with clamato juice instead of tomato. yes. clam juice. yes.

i was suspicious initally. and now i pretty much always drink them. i think i like them better than most other types of beverage. heck yes. dusty's makes them with celery, a pickled bean, and a stick of beef jerky. that's a meal in a drink, people. a meal.

but i am off topic.

the joy, the gloriousness of it... the weather up there (remember, we're back in the mountains of whistler on australia day, stay with me) turned spectacular. sunshine. clear views across the valley, with epic clouds sort of sitting on top of the village... there was an inpromptu footy game at chick pea hut with strangers, there were men skiing and riding round in shorts, there were sneaky beers on chairlifts, in gondolas, there was a naked arse at whistler peak, there was snowboarding holding beer (please note at no time, even with all the falling over, was a drop of beer spilled), there were loud obnoxious noisemaker things emitting loud honks.

we did dave murray downhill, we rode green chair, we hit harmony and nicole rocked another blue run (not bad at all for a beginner), we shredded the saddle and finished up with peak to creek. a warm day gave us almost spring-like riding conditions coming down that epic final run.

i really like peak to creek. i only rode it once last season, on christmas day with little brother, and then no more. i don't know what i was thinking last season, was i crazy? it's a lovely long run, with the right music playing and comfortable snow (anything more than about 10cm of fresh) it is, for me, one of the joys of my life. plus you end up at dustys, which is one of my favorite places in whistler.

as the rest of the day was a blur of dustys, subway (a girl's gotta eat), home then crystal's, bill's, tapleys, and finally fat tony's and home, i'd like to reflect a little.

in australia i never really got into aussie day that much. during uni i was always working at retreat hotel, my trusty trashy local/employer. before that i don't think it rated, maybe as hottest 100 day, but not as anything more significant.

i'm not sure i'm so patriotic that i'd chose australia to live overall. i mean look, i'm half a world away in whistler, canada. i'm happy to be an australian for the opportunities it has afforded me: renewable 2 year visas in canada, the fact i grew up speaking english, the comfortable middle-class upbringing i enjoyed, the fact australians are still welcome (or at least endured) in most/all coutries in the world... these are aspects i have taken full advantage of.

but really, patriotism is a little beyond me mostly.

i did think of making snobbish comments about southern cross tattoos and crocodile dundee, but with all my worldly experience these days i shall instead observe that a good day was had by all, nobody (that i know) was too badly hurt, or arrested, or made too much of a fool of themselves.

in a town where the focus is on fun, i will have to say: success!

thanks going out to: nicole n mitch (ultimate housemates and best friends), kate and phil (hottest couple in town), kate "janice" (she gave me some of her breakfast, and shared much boy-related wisdom), karin (my swedish fiancee, aren't i the luckiest), toby (everybody's new bff), ben & grey for various entertainments (and for wearing shorts with thermals underneath, so fucking ugly), and the glorious amy schilling for all that whipping our hair back and forth at bills. plus all the others that were here and there and dancing. only the ones that danced get thanks. 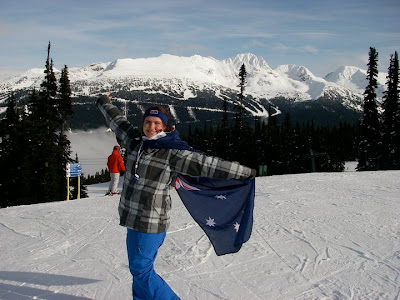 ah, and special thanks to kate and karin for all the photography. nothing like waking up the next day/day after that to see that you have, in fact, been tagged in no less that 39 photos on facebook. nothing nerve-racking about that AT ALL.

xx happy australia day kids, until the next one.
written by helen