day 07. a picture of someone/something that has had a big impact on you.

i think really for me, the biggest impacting factors in my life have been books and music.

so many great amazing examples, but i've been thinking carefully to track it back:

the first books i read that made me cry. i got so depressed in the 3rd one when robyn killed herself to save the others that i cried all weekend.

the realisation that someone can create something fictional that draws you in, makes you attached to the characters to the point where losing them is like losing real friends... that definitely had a big impact on me. they're hardly award-winning prose, but i loved them. they're also the first books i was told i wasn't allowed to read because i wasn't old enough yet. obviously i thought 'screw that' and read them anyway.

it made me want to write, to create characters that other people get attached to. i don't know how i would go killing people off, but it's something i really want to try, writing to capture my audience... that's why i want to write teen fiction. i want to move people the way i was moved by these books. 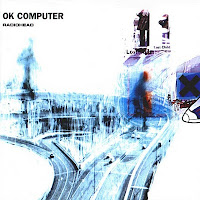 and OK computer is my musical 'big impact'.

i think i was 16. i bought this album in tamworth while mum and i were on a shopping trip.
i bought it because a boy i liked told me radiohead were his favourite band, and i wanted to know more about him by listening to music he liked. it was rainy and we drove back to kentucky and i put it on in the car and it blew my freekin mind.

listening to radiohead opened me up to all sorts of different music, because radiohead taught me that sometimes you have to persist with music, to let it grow on you, so you can hear all the parts, the hidden bits...
and that's the story behind that.
written by helen