having just moved back to my hometown of armidale, nsw after almost 3 fun, snow-filled years in BC, Canada, i've noticed a peculiar phenomenon. apparently i'm not the only one, but whenever i go "downtown" in armidale, i get nervous about who i'm going to be seeing.

while i lived in whistler, bumping into people i knew was part of the charm of the whole deal. in fact i sort of enjoyed it. i would even smile and say hi to people i didn't know very well at all, but perhaps were the ones who sold me my coffee every day, or scanned my ski-pass, or were just a customer i had bantered with at work (actually, there was a scary one of those, who remembered me from a supposed conversation we had while i was talking her into buying her winter coat, and creepily popped up everywhere, on my bus, in the coffee shop... she was either one step away from being my very own stalker, or from falling into the category of over-eager friend). the point is, the possibility of running into people i knew filled me with happiness, a sense of community... like things in whistler were just a big party.

however, here, in the place where i grew up, i just worry about who i am going to run into in the supermarket. to the point of some form of social anxiety. which isn't really me at all. i've been thinking about it a lot, and i think the main thing that causes me stress is that these are people i haven't seen for 8 years, some of them anyway, and everyone changes... people don't look like they used to look, their adult incarnations have unrecognisable qualities. like children attached to them, or new haircuts, or some have got skinnier and some have got fatter... some have got taller. i haven't seen any shrunken ones yet but you know, it could happen.

i guess i just worry about the chitchat, because as a general rule, the conversation goes:
"oh hi, how have you been? what have you been up to?"
"i've just got back from canada, i've been living there the past 3 years"
"oh cool."
...
"anyway i have to go do my grocery shopping".

i'm not good at those kinds of conversations, to be honest with you. i guess the trick will be to settle into things, make some armidale friends so that the awkwardness, or the fear of it, melts away. the problem is going to be that i might always be that person who is moving around, (hopefully) living in other countries for extended periods, so it may be that i will just have to make peace with my fear of Armidale's various supermarkets.

and maybe those Armidale people who fill me with such irrational fear are merely regular friendly folk, who have all sorts of stories about their own adventures.

but i don't know. right now i'm just a little scared of them. 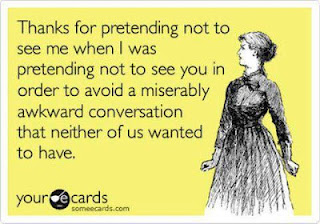