The real spoiler here is that there is no universe in which I was not going to like this movie. I'm well aware that I'm not alone in this love: last night as I floated between dinner and drinks, all the people I ran into (all good ones, yay) expressed envy at my plan to see Jurassic World ASAP, which was 10am today. They were jealous. I was Not Sorry.

There's a race to write this review as I've just started downloading Jurassic Park and I want to finish writing before the download is done, which gives me about 15 minutes.

First let's talk about the font. It was vintage Jurassic Park circa 1993 with a modern twist. Streamlined. Silver instead of red. Classic, "rebooting a franchise" silver. I smelled money. I was ok with it.

Secondly: The preamble to disaster. I love the part where they set the scene. They were all "we've learned from the mistakes of ninety three, this is state of the art glass, cement and helicopters. We have holograms, bitches. We will not be falling into the traps those idiots from before failed to consider. We got this. Look: we built a bigger fence". And I was all "shut up and let's skip to where the dinosaur escapes".

Third: Chris motherfuckin Pratt. The raptor-whisperer. I don't want to spoil everything in this dramatic cinematic thriller masterpiece, but in the trailer you will note that there's a badass scene where he's riding a motorbike and the raptors are running with him, not after him - that's all I'll say. I've only really seen him in comedic roles and his action acting is fine, my only note is that I'd have liked more jokes.  To be completely fair about it, there probably wasn't time. His forearms made up for the lack of jokes. I'm ok with this objectification because muscular forearms are a practical thing when it comes to kicking ass and taking names, and ultimately what is really attractive about Chris (first name basis, yep) is how he just helps people and cares about animals. And that's an attractive quality for all humans to have. Solved.

And also: Bryce Dallas Howard (playing Claire Dearing, who is Park Operations Manager, I'd like to quietly point out she had one job...) Does All The Things in Heels. Much conversation to be had here - me and my fellow female movie-goer companion friend Kate took a quick poll in the interests of science and research and fairness, and ultimately agreed that running away from reptiles that were originally extinct literally millions years ago and have been reanimated with rather shakily-explained DNA might be made unnecessarily complicated by high-heeled shoes. So silly. But also, you know, aspirational. Women need goals.

Another thing: I love how many things get broken. I love it. Break all the hospitality infrastructure! Ruin all the sculptures! All that metal that holds the buildings together somehow? Wreck it all! This movie must be seen on a big screen at least once. Just for the destruction and the dinosaur chases on a large scale. Don't deny it - do it.

Something else, a significant point I think: It's hard to re-do a beloved franchise. I'd be remiss if I didn't acknowledge the formative experience that was Jurassic Park. It was the first movie I saw on a big screen. My grandma, who took us all, must have wanted us to have the worst nightmares...What a  meanie. While I probably wasn't as scared this time around (raptors in the kitchen, anybody? I was 8 years old when I saw that shit. Nobody comes back from that without metal cupboard-based trust issues) I still got that exhilaration I associate with that first movie-going experience. I'm certain that most of the people I know have a Jurassic Park story, in fact, I've heard a few great ones already. I am happy to recommend this movie to all you people with your fond memories.

An extra thing: Indominus Rex, amiright? You'll know it when you see it. Might name my firstborn Indominus.

The final point: They actually learned nothing. 'They' is the people running the park now (who frequently reference Jurassic Park circa 1993, so it's not like they've had it wiped from their minds). There was a 'what not to do' and they thought they knew better. The dinosaurs obviously had other ideas. I'd like to get worked up about this, but the honest fact of the matter is that I'm glad they fucked up (I don't think this is a spoiler because if you care at all about Jurassic World you will have watched all the trailers for it like I have, and you know a dinosaur ruins some things. Don't be mad) - the huge mistake they made was a great movie-making opportunity. I can't blame them for it. I ate that shit right up. I'll probably see it again and give them even more of my money.

5ive stars. It was 4.5, but then there was this picture of Chris Pratt. His waistcoat has so many pockets and is so practical, he earned the film the extra half-star. 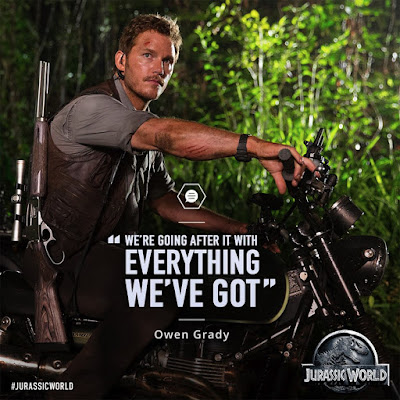