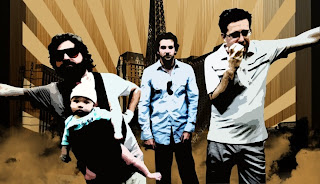 kids, i've lost my touch. i'm getting old. i say this not to be dramatic, or ridiculous... i say this because i had a window there where i could handle my alcohol, where i could match beer for beer with the best of 'em (in whistler, no mean feat).

if we're honest, which i feel we should be with each other, blog readers, i was probably pushing it a little harder than i absolutely needed to... various reasons for it, even though i knew better, because one night rolls into the hangover which rolls into the next evening and some beer to make you feel better. plus fuck it, if you can't punish your liver when you're 25, when can you?

the realization that i've lost my touch, or i'm out of practice at least, came in the form of the swedes' midsummer party, otherwise known as 'that time i got into a hot tub wearing my dress' or 'that time i slapped/ attempted to slap Fabel 5 times', or even 'that time i drank too much vodka punch'.

the hangover nearly killed me. i've never EVER let drinking affect my work and i just could not cope, i had to take myself home early the next day. holy crap.

since then i've let it slow down a little... dropkick murphys was pretty crazy, a blog about that very weekend should follow (just saying it should, not saying it will), as well as various times in the last week or so... double long island iced teas is a combination of words that still makes my brain twinge a little bit...

i have had a hangover all day today and i'm over it, i think it's time to try something else... like not drinking. or drinking more.

any suggestions or votes for one option or the other, you just let me know.