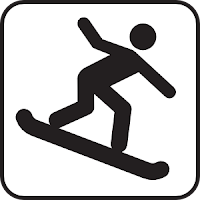 the mountain is open.

if the 1 & 1/2 of you that actually look in on this self-indulgent blog from time to time will recall, i am sort of into snowboarding. so this is rather good news for me...


whistler blackcomb were advertising for bloggers to write for them for the season, weekly, with the appealing offer of a free season pass. i considered this and actually got sort of excited about it, thinking about what i would write for my application to go with my resume. then i thought about it again and don't feel confident i could provide video footage and photos that would be up to par with the whole 'shiny squeaky clean' whistler blackcomb website. they must pay someone well to put together all the graphics and whatnot to make that site so tourist friendly.


i am generally a shit photographer, and right now only have my iphone and a little shitty camera to play around with.


it doesn't mean i don't love these mountains though, and so i thought i'd have a crack at the 250 words whistler blackcomb was asking for about 'your best day on the mountain', because i did originally start this blog for writing practice.


i actually think my best day of 09/10 season was the last day i spent on the mountain, which was late april/early may on blackcomb.


i was working at 1.45, the close shift at the supermarket i was at as a cashier for 6 months. so i had time to ride in the morning. miracle of all miracles, we had about 12cm of fresh juicy snow the night before. i was waiting for the lift at 9, when it opened. riding solo- i did a lot of that last season, firstly because i was learning to ride and i hate the idea of slowing people down, so i went up on my own most days, even if it was just for the hour before i started work to get a couple of runs in. once i could keep up i found that i still loved riding on my own, music playing in my ear, hitting the singles line at the lifts, sometimes just doing the same runs over and over again, totally stoked on it. just like this day in may. i went straight up aiming for jersey chair, to hit those few runs that i was loving at the time, when i realised i as perfectly capable of dropping right over the side- the powder was fresh, soft and forgiving and there were some trees to sneak into right over the other side of the groomer...


i think i probably hit that same run 5 or 6 times, with no lift lines, no falls, not a care in the world, until i saw that glacier chair was just about to open, with the tiniest line. as i came up to the very end of glacier chair, the last bits of cloud had cleared and it was officially a bluebird day- clear and beautiful skies with a view right down the valley.


there are very few moments in life where you truly believe you are untouchable. normally you're drunk at the time, and about to do something very stupid, which 9 times from 10 will end badly, probably with bruises. but this day was one of those days where i was so filled with the perfection i was experiencing that i felt weightless. everything went right- i picked good lines, i had the right tunes playing, and i had no falls. i felt like a superstar. i felt like someone should have been filming me. i did 3 runs from glacier, and coming out of the last run i went far right and took the trees that had been cleared out by the fires that went through in 09 summer, the first month i was in town.


fresh lines at midday on a bluebird day in may.


i didn't know at the time that it was my last day on the hill. i think if i did, it would have had to mean more, for me to do something significant like i did riding my last day on whistler, where i spent the day hurrying around trying to do all my favourite runs, hating the saddle in particular on the peak because it was damn icy. the way this last day fell though, it was just this sort of moment in time that made me the happiest i'd been for a really long time. since the innocent happiness of spending a whole day outside playing matchbox cars with my little brothers when i was about 10.


i'm in love with these mountains. the beautiful thing about this place is that everyone seems to have had this same connection i feel, and thus to have some kind of personal stake in the weather, the snow, all of it. i know if i hear people bitching about anything (especially at this point in the season where i'm still experiencing the heady rush of first love) to do with the mountain, i feel like shaking them... or kicking them in the shins hard enough to leave bruises.


not to get all enlightened on your asses, but life is really very simple. living here has taught me that, and i don't think i'll ever be the same. 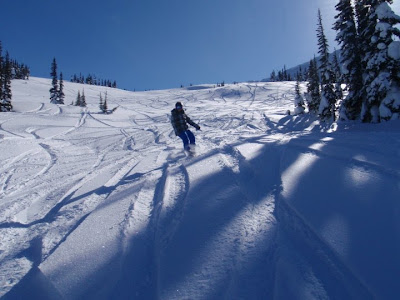